The day is the full moon night, and the tide of January is approaching. It is the best time to lay eggs on the shore. However, the weather forecast suddenly differs, and everyone is worried that it will affect the landing of eggs. When the night falls, the climax will come at around 9:30… At 8 o’clock, the sky is not completely dark, and there are already pairs of squats appearing in the waves, trying to swim towards the beach and crawl. … As the tide continues to rise, there are more and more squats on the shore, and at around 9:30, it is spread all over the beach. I finally waited for this spectacular moment!

In 2014, under the joint promotion of more than 40 scholars, experts, protected areas and representatives of civil society groups from 22 institutions in mainland China, Hong Kong and Taiwan, the “Three-Straits Three-Dimensional Conservation Alliance” was established and established annually. The Lunar New Year’s Eve Festival is a “care day for advocating love and protection” and jointly promotes the protection and dissemination of cockroaches. 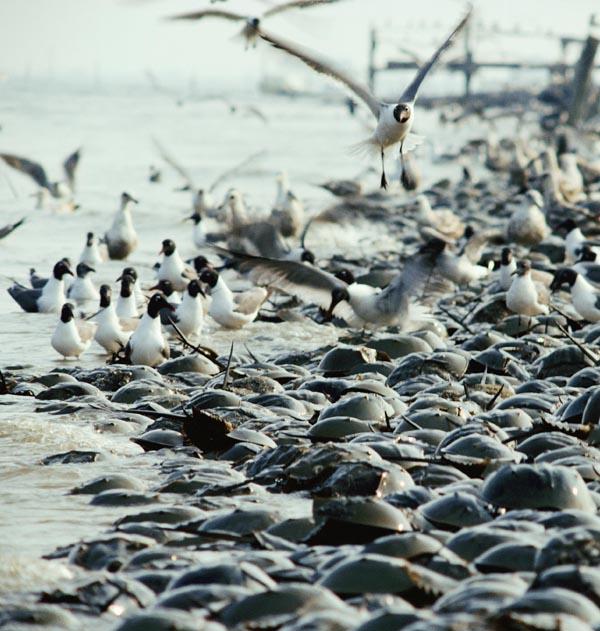 The coastal beauty and marine protection project of “Aesthetic Nature” has been committed to the protection of Chinese cockroaches. In May 2016, as a member of the IUCN鲎 expert group, I was the head of the “Aesthetic Nature” marine project. I visited Delaware in the US East Coast, in Delaware Fisheries and Wildlife Management. Accompanied by the experts of the bureau, they have a deep understanding of the current situation of the American lynx, hoping to learn from it and provide some new ideas for the protection of the Chinese cockroach.

Delaware (Delaware) is an unremarkable small state in the United States, and I have a very poor understanding of the state. I can say that I know almost nothing. I only know that this place I know nothing about has the most anticipated scene in my life – the spawning scene of the American lynx! I came here to witness this grand occasion, not only carrying my own dreams, but also carrying the dreams of all members, volunteers, partners and friends of the “Aesthetic Nature” marine project, which is our southern China. The grandeur of the old dreams of the seashore, but longing for goodbye.

Finally, on this sunny afternoon in May, I came to the seaside of Delaware Bay. In the afternoon, the low tide, the hustle and bustle of the sea have disappeared, but they still keep moving in the distance. The beaches without shackles are not silent. The migratory waterfowls are busy on the beach to supplement the energy and make the final supply for long trips to the Arctic Circle. This season’s Delaware Bay is the last energy refueling station for many waterfowls that travel long distances to the Arctic, and their supplies are licking eggs.

The eggs provide 100% of the food source for the waterfowl that came to the Delaware Bay in May. Take the red-bellied owl as an example. A newly arrived red-bellied owl has a body weight of only 85 grams. If they want to fly to the north pole and successfully breed, they need to quickly gain more than 180 grams in half a month, then Leave the supply station on time before May 28.

In the three years of research and protection in the northwestern Guangxi Bay, my friends and I have not seen the eggs in the wild, so Professor Dick Weber, an expert on egg research, dug a few groups of eggs to show me. He told me that at the peak of spawning, every square meter of beach can dig up hundreds of such eggs! It’s amazing, it’s no wonder that the waterfowl are rushing!

I have seen cockroaches and their predators, and I am looking forward to seeing the feeling of cockroaches coming ashore to lay eggs more urgently! The day is the full moon night, and the tide of January is approaching. It is the best time to lay eggs on the shore. However, the weather forecast suddenly differs, and everyone is worried that it will affect the landing of eggs. When the night falls, the climax will come at 9:30. At 8 o’clock, the sky is not completely dark. There are already pairs of squats appearing in the waves, trying to swim towards the beach and climb. Holding…

As the tides continue to rise, more and more squats are coming ashore, and at around 9:30, the entire beach is spread. I finally waited for this spectacular moment!

For me, such a scene is already a reappearance of dreams. However, the local staff told me that this is not the most spectacular sight. If it is not affected by the weather, it is generally possible to see tens of thousands of pairs of beaches full of beaches! Due to the limited space for spawning, they are often crowded in layers, occupying a position as wide as a road, extending all the way to the bay. The scenes I have seen and shocked may only reach one tenth of the peak in number! I can’t help but use a lot of exclamation marks to express the shock that Bai has suffered. But for the rare opportunity to come here, I am very satisfied with the status quo.

The past and present life of the American lynx

The fate of the American cockroach was very similar to that of the Chinese cockroach. Before the 1990s, 鲎 did not belong to the fishery management or protection of the US government, nor did it enter people’s field of vision. For local fishermen, the cockroaches that come ashore to lay eggs are commonplace, and they often use cockroaches for fishing. At least until the early nineteenth century, there was a record of using cockroaches as bait to catch squid. Earlier, there were records of Indians using cockroaches as fertilizer.

In the 1980s, after the blood stasis preparation was developed, the American cockroach was used for blood collection, and the bait market was also very lacking in management. During the breeding season, fishermen can easily transport pairs of live animals from the beach into trucks without having to comply with any regulations or pay any fees. Since the clam shell contains a large amount of chitin, most of the plutonium is also transported as a raw material to the chitin plant.

In the early 1990s, an old lady who often observed in the local area was aware of the catastrophic consequences of this unmanaged fishing. She began to call on the local government not to turn a blind eye and take timely measures to supervise. At that time, there was no regulation on the population of the American cockroach, scientific research and monitoring were lacking, and the local government did not pay attention to the seriousness of this matter… (the same situation since China in the 1990s! But the old lady and other people who care about this matter did not stop acting.

Soon, in 1990, the Delaware Fisheries and Wildlife Authority began to pay attention to this matter, began to require that permits and reports for fishing, and set quotas for statewide fishing; in 1992, it recognized the protection of The importance of migratory waterbirds, Delaware began to ban all fishing in all federal and state-owned areas; even so, by 1995, the number of American cockroaches still showed a downward trend, and 鲎 as a bait market Demand and market prices have also soared, many barges have been on the beaches of Delaware Bay, and public voices have been heard… Public and policy pressures have caused Delaware on the Delaware Gulf coast. And New Jersey has urgently banned fishing for the cockroaches; finally, gradually, the management of cockroaches has finally become a matter of concern to the entire federal government. Other states in the United States have begun to attach importance to the protection and resource management of the American cockroaches. Their respective resource management regulations. With the increasingly perfect and strict management of resources, the monitoring data of wild populations in the Americas has been accumulated, and the quotas and management measures of the states are more targeted. After 2000, the population of the American cockroach in Delaware began to slowly recover.

Nowadays, the protection of local American cockroaches and the protection of migratory waterbirds have become an important example of protection in the region. The researchers and protectors, policy makers and educators of 鲎 and waterfowl have conducted in-depth cooperation in all aspects. Delaware’s shackles have become role models for protectors in other states. All of this stems from the unremitting efforts of people who have been enthusiastic about this generation.

Written to the future of China

Zhongtong, also known as “Chinese sturgeon”. This marine “living fossil” with the national name has lived in the country with the most love and sympathy, but it has not been cherished and loved by people. Since the 1990s, the number of Chinese cockroaches has decreased dramatically. Taking the change in the population of the wilderness in the Beibu Gulf region as an example, according to conservative estimates, the competition has been reduced by more than 90% in the past 20 years! Take a look at the story of the Central American cricket above. It used to be the same ancestor and the same path, in the Americas and in Asia, it is such a different fate! Can’t help but be sad…