What kind of flower is the biggest flower in the world? Many people must answer the question, that is, the plant of Rafflesia arnoldii, the big flower is called the king flower. When the flower is completely open, the diameter is more than 1 meter. It is indeed the king of flowers. The big flower is a kind of whole Parasitic plants, Rafflesia, have more than 20 species in the world, mainly distributed in the tropical rain forests of the Malay Islands and the surrounding areas. Although many people know them, not many people have seen their true contents.

Although there are no large flowers and plants in the country, there are parasitic flowers (Sapriahimalayana), which is the only species of Rafflesiaceae in China. Parasitic flowers are very rare in China, only in the southeast of Tibet and Xishuangbanna in Yunnan. It is also distributed in parts of northeastern India, Thailand and Vietnam.

The parasitic flower was first discovered in northeastern India in 1844. It was discovered in the 1960s and 1970s in the country. In the following 1986, there was a record of Xishuangbanna’s specimens, and then the parasitic flower disappeared, as if it were in Banna. The territory is extinct in general. Time is a few decades. The turning point was that at the end of 2015, an outdoor group encountered and photographed parasitic flowers in Xishuangbanna, which was sent to the network and attracted the attention of plant taxonomists. After subsequent investigation and appraisal, it was finally determined that parasitic flowers were encountered. This species has disappeared for a long time.

In fact, according to this outdoor group description, this rare plant was discovered as early as the end of October 2010, and it was recorded several times in the following years. As they say, most people in the outdoor circle don’t understand plants, and scholars who study plants rarely know about outdoor crickets, and the players who participate in the activities are not plant researchers or plant lovers. So I found that it was gone for several times, and it was not until five years later that it caused quite a stir.

Among the parasitic flowers, only one species of parasitic flower is confirmed in the world. In addition to the genus Heliconia and the parasitic flower genus, there are also Brugmansia and Brugmansia zippelii. In the past, the big flower family also contained a class of plants, that is, the plant of the genus Mitrastemon. The earliest discovered species of this genus was Mitrastemon yamamotoi, which was discovered and published in Japan in 1909. At that time, it was placed in a brand new Mitrastemonaceae. Later, in 1919, the taxonomists put it in the big flower family. For a long time, everyone thought that the relationship between the genus and the big flower system was close. . It was not until 2004 that evidence from molecular biology indicated that Capreolius should be isolated from the genus Cymbidium, and that the genus was placed in the Ericales, while the large genus was placed in the original Malpighiales.

There are some similarities in the buds and parasitic buds. Their buds are covered by scaly leaves and are basically spherical (the capillaries are longer). However, when it comes to flowering, the difference between the two is easy to see: the leaves of the stalked grass are opposite to each other, and the flowers are bisexual; while the scales of the parasitic flower are tiling, and the flowers are unisexual. Of course, the most intuitive is the size, the parasitic flower is much larger than the caper grass.

There are two species and one variety of the genus Capreolus, and the genus of the genus Capsule is produced in Yunnan, Guizhou, Guangxi, Guangdong, Fujian, and Taiwan. It is also distributed in Cambodia, Japan, and Indonesia. It is usually parasitic in the family Fagaceae. The roots of the plants (Lithocarpus), Castanopsis and Quercus. The genus Mitrastemon yamamotoivar (kanehirai) is native to Taiwan, and the other species, Mitrastemon matudae, is distributed in Central America. This genus is typical of tropical Asia and tropical America. 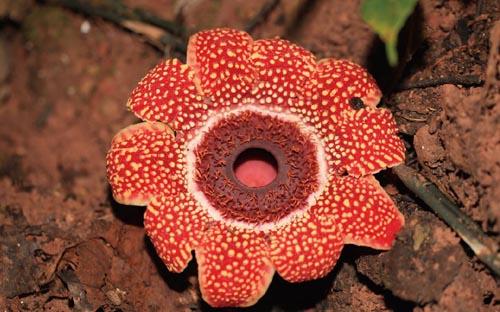 The name of the cape grass comes from its stamens. In the Latin name, “mitra” means the Greek cap, and “stemon” refers to the stamen. Explain that the shape of the stamen is similar to that of the cap. The name of the cape grass. The stamens of the genus Capreolus combine to form a cap-like body, which initially encloses the style and stigma, and the pistil is revealed after the stamens are detached. It has been reported that Capreoli mainly relies on bees or flies to contact the anthers and stigmas to help them pollinate. Its seeds are mainly spread by birds and ants, and may also be spread by animal trampling or rain washing.

The two plants, their breeding methods have yet to be further studied. As a relatively special group, the scientific research value is relatively high. First of all, parasitic flowers have important reference research significance for answering why large flowers and plants have evolved huge flowers. The famous British naturalist David Eidenberg explained in the documentary “The Private Life of Plants” that in fact, large flowers and grasses do not need such large flowers to attract flies. Is it because he said that when resources are freely available, When you get it for nothing, you will try your best to spend it.

In addition, the relationship between parasitic plants and hosts is also very scientific. A large flower and grass gene in Malaysia has a great similarity to the host plant. This is a phenomenon called horizontal gene transfer and is also found in some other parasitic plants. The horizontal gene transfer of this large flower is about 2% of the whole genome, but the expressed protein reaches a staggering 49%. These proteins control the physiological functions of the large flower, and even successfully rule out the immunity of the host plant. Rejection allows large flowers to rely entirely on host plants.

Whether it is parasitic flower or caper grass, it is very rare in China. The reasons for the analysis are, on the one hand, because their plants are short, only flowering occurs, and they are often difficult to be found under the jungle; on the other hand, they have weak natural fertility and are difficult to form a wide distribution in the wild; Role, its distribution is directly affected by the distribution of the host. In recent years, due to the strong interference of human activities in the south, many tropical and subtropical natural broad-leaved forests have been damaged to varying degrees, which makes the survival of these two plants in the wild, and does not rule out the risk of extinction.

Parasitic flowers are listed in the country as rare and endangered plants in India. In Central China, there is almost no concern. In China, the genus is also a very small species. Due to its mysterious parasitic life, parasitic plants cannot be relocated to the ground at this stage, and only local conservation measures can be taken. For many rare and endangered plants, discovery means demise, and protection for them is really imminent.